Kenneth Nowlin (known as "Thunder") has been incarcerated on death row San Quentin since 2001 and is currently in the Infirmary where he has been experimenting with writing poetry on top of brightly coloured painted backgrounds.  He also incorporates outlines of his hands and his finger prints into his work. Thunder tells of how he "grew up in the system".  Before being sentenced to death, he was incarcerated for six years in the CYA (Youth Prison).  He was sentenced to death whilst serving time in prison for robbery.  By his own self admission he used to be a racist, but he renounced his racist ways in 2011, and he completely cut ties with the gang he had been a part of. He shifted his focus to family and inner peace. Thunder now expresses himself through his writing and art and combines the two to create colourful emotional collages of his feelings.   Raw and hard hitting you can read some of them below and on our blog here kenneth-nowlin-expressing-feelings-through-art-poetry-from-san-quentin-death-row.html.  The first poem here entitled "Suicide" was inspired by Jay Cole the Rapper, who stopped outside Thunder's cell and challenged him to write a rap and to step out of his comfort zone.   Jay and Thunder spoke for about ten minutes whilst he was on a tour of the prison. 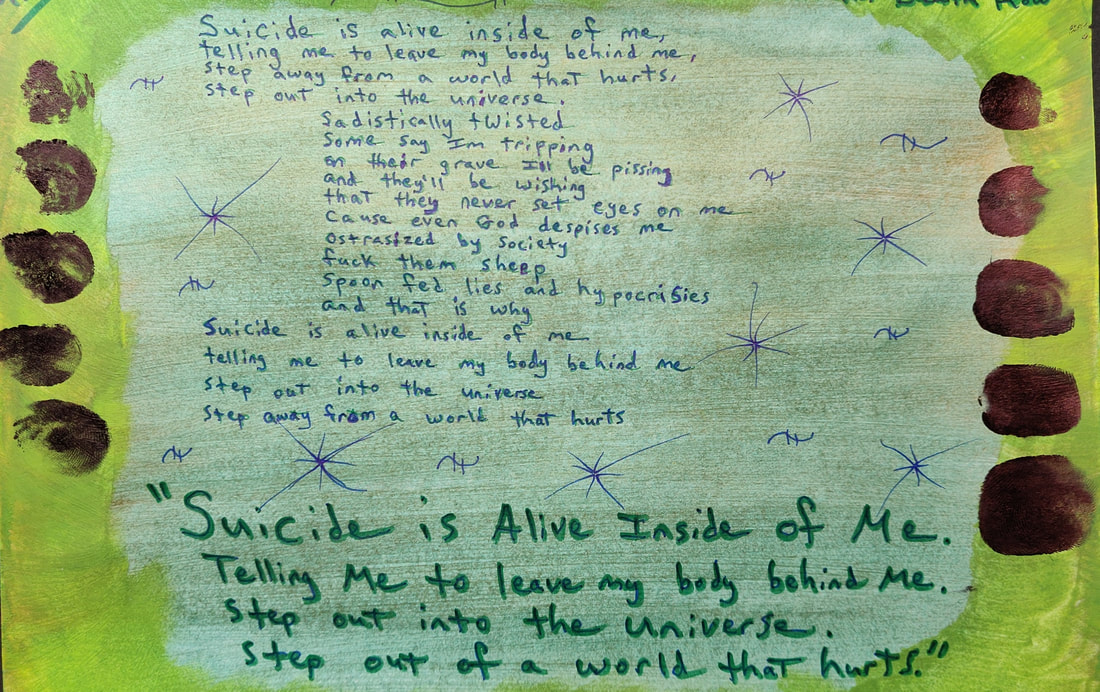 Suicide is alive inside of me,
Telling me to leave my body behind me,
Step away from a world that hurts,
Step out into the Universe.

Suicide is alive inside of me
Telling me to leave my body behind me
Step out into the Universe
Step away from a world that hurts.

To read more of Thunder's poetry and see his artwork click here to visit our blog  kenneth-nowlin-expressing-feelings-through-art-poetry-from-san-quentin-death-row.html